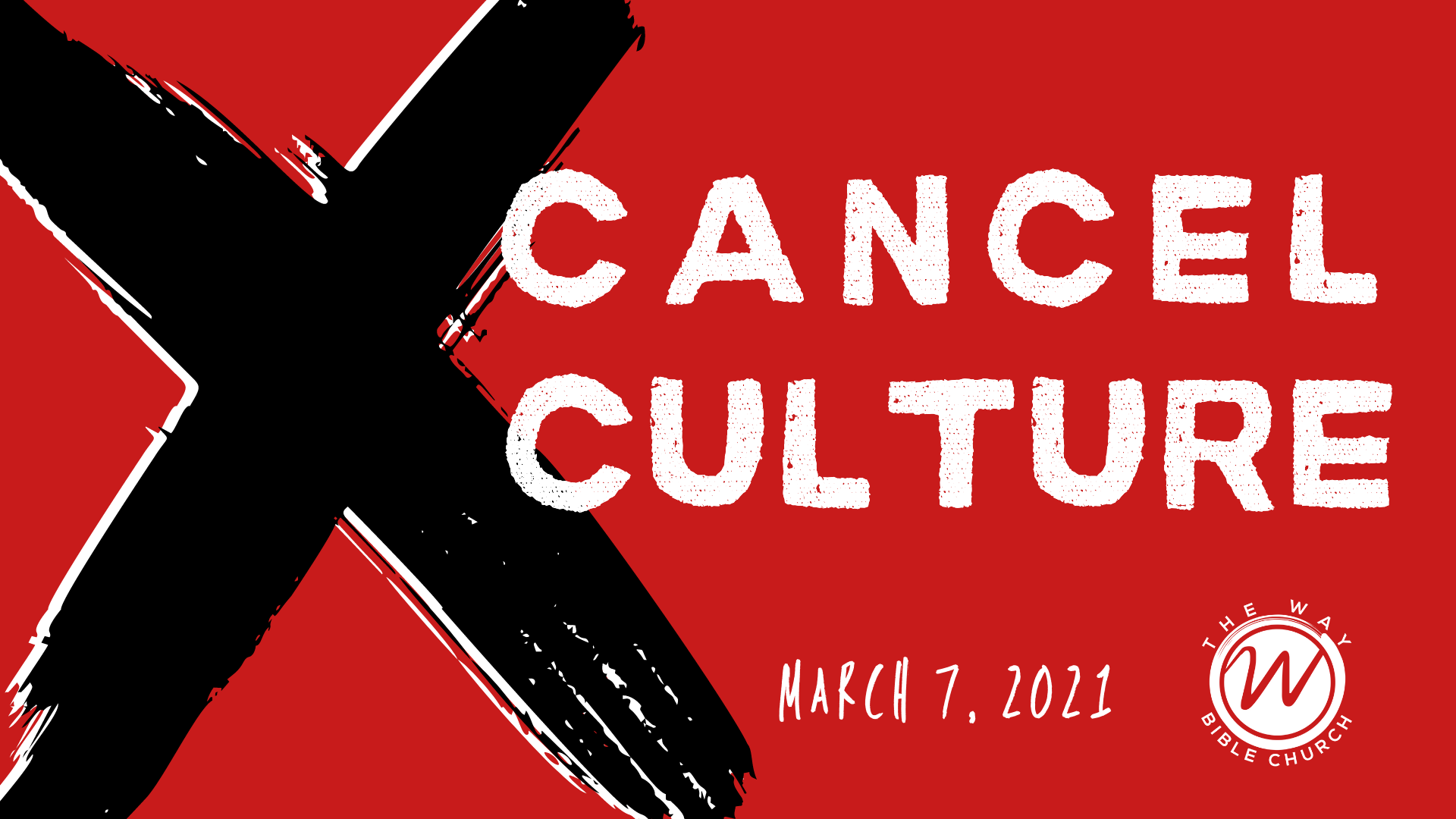 ancel culture (is a modern form of ostracism in whichsomeone is thrust out of social or professional circles – whether it be online,on social media, or in person. Those who are subject tothis ostracism are said to be "cancelled".

Whatdoes this have to do with us as The Church? Quick answer.. A LOT!!

OurSavior was the king of everything that we should learn about Cancel Culture,not only was He a Victim of it, but He also plays a huge part in it as well.Ill Explain further in a bit..

Sowe are seeing in todays atmosphere :

Theresa few sides of this phenomenon :

Marriages,Sexes, Female Sports, Pipelines, and certain Industries. These ones are pushedeither for or against depending on the Political biases of the currentadministration in other words they tend to often change.

Isn’t it crazy that for a culturethat wants to walk in such GRACE and lack of judgement, it also is SO OFFENDED?

Thenthere are the people in the headlines:

Did you hear what he said, what shedid, etc.. I think we all have been that person “in the headlines” of someonesmouth.

Jesus Predicts Peter’s Denial 31 Then Jesus told them, “Thisvery night you will all fall away on account of me, for it is written:“ ‘Iwill strike the shepherd, and the sheep of the flock will be scattered.’[c]32 But after I have risen, I will go ahead of you intoGalilee.”33 Peter replied, “Even if all fall away on account ofyou, I never will.”34 “Truly I tell you,” Jesusanswered, “this very night, before the rooster crows, you will disown methree times.”35 But Peter declared, “Even if I have to die withyou, I will never disown you.” And all the other disciples said the same.

Thisportion about Peter is in ALL four Gospels

Let’slook at Peter, because Peter is US at times..

Peteris an I in our DISC Test (Inspiring)

2.    Jumps out onto the waves tofollow Jesus

Thena PLOT SHFT……. as Jesus is about to take to the Cross he denies Him three times

So,here is where we come in..

ThisCancel Culture does effect us in many ways.

In this we see a lotof our issues today:

We havean offense issue and it really comes down to WE ALL WANT OUR VOICE HEARD… Cool,but we have got to ask “Why?”

1.   To speak Life into a dyingsituation

2.   Or just to have the biggestbark in the yard

Obviously I know there are keys issues that are being challengedthat effects us as Believers and our Faith such as Abortion, Marriage, Freedomto Assemble, Rights that our country already has in place, and those worthfighting for.

Being Youth Ministry for 25 Years one way or another I can tell youthat Racism was on its last leg until Media and OUR generation made it a bigdeal again.

Please hear me.. If your day is ruined oryou get charged up from Facebook or Social Media to the point of losingjoy..  PLEASE CANCEL those from yourlife.

Wehave all become so offended.. Some of ya’ll got offended that I said you areoffended. We need to Grow up!!  Thiseffects us Spiritually as well.. HURT PEOPLE HURT PEOPLE!!

*EVER GOT INTO FACEBOOK BEEF? LOL, WHATA WASTE OF TIME HUH? BUT IT WASN’T AT THE TIME LOL

Hebrews 5:12 In fact, though by this time you ought to beteachers, you need someone to teach you the elementary truths of God’s word allover again. You need milk, not solid food! 13 Anyone who lives on milk,being still an infant, is not acquainted with the teaching aboutrighteousness. 14 But solid food is for themature, who by constant use have trained themselves to distinguish goodfrom evil. #noadultbabytalk

FORINSTANCE: An artist, actor, personality says something wrong and then it’s allover for them (elaborate)

Wedespise a cheat, want pure loyalty from friends and family, we don’t want to belied too, we want to deal in Honor

Guesswhat? I stand up here and have failed all these.

WHO DO YOU NEED TO UNCANCEL? A family member,friend, boss, co worker, church member, etc

There are times when we must remove toxicpeople from our lives, I totally agree but if there is chaos and confusionstill in that, maybe you want to look at that now.

2. Stop Cancellingourselves… The hard one...

Arewe cancelling ourselves based on mistakes, our family, our lack of things(money, etc)

“Oneday I want too……… The someday syndrome”

2 Corinthians 5:17 If anyone is in Christ, they are a new creation,the old has gone and the new is here!!

Shameis a horrible thing. It covers you, separates you, takes away joy, pushes youaway, digs the hole and buries you…

Peterafter denying Jesus.. Accepts his failures and decides to stay in the Faith andis rewarded for that:

Jesus Reinstates Peter in John21 instead of cancelling him

Petergoes on to be a huge leader in the faith and is a part of many areas in Actsand is martyred in Rome by Crucifixion as His Savior was.

Thinkof King David, Paul, Rahab, Moses, and so many others who could have cancelledthemselves or fell victim to Cancellation.

Matterof fact I think its rare to see someone who has a Blessing without having facedBattles.

Whatdo we need to learn here

Romans 6:6  For we know that our oldself was crucified with him so that the body ruled by sin might bedone away with,[a] that we should no longer be slaves tosin— 7 because anyone who has died has been set freefrom sin.8 Now if we died with Christ, we believe that we willalso live with him. 9 For we know that since Christwas raised from the dead, he cannot die again; death no longer has masteryover him. 10 The death he died, he died to sinoncefor all; but the life he lives, he lives to God.

He still restores us into Him even when wedeny Him at every turn.

Weknow we have a tendacy to cancel others when they make mistakes ARENT WE GLADTHAT JESUS DOES NOT!!

Weknow we have a tendacy to cancel ourselves and the Blessing ARENT WE GLAD THATJESUS DOES NOT!!

Thereare times we need to cancel some things out of our life..

Howdo you eat a steak (one bite at a time) Start with one area, one person, onearea you need to give back to God.

Whatis an area you need to allow Jesus to cancel?

Thisis one area of our life we should celebrate Cancel Culture… our walk withJesus.